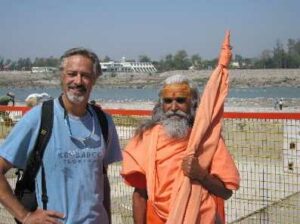 Dana Sawyer was born in Jonesport, Maine in 1951. Currently he is a full-time professor of religion and philosophy at the Maine College of Art and an adjunct professor of Asian religions at the Bangor Theological Seminary. He is the author of numerous published papers and books, including Aldous Huxley: A Biography, which Laura Huxley described as, “Out of all the biographies written about Aldous, this is the only one he would have actually liked.”

Sawyer has been involved in fund-raising activities for the Siddhartha School Project in Stak, Ladakh, north India, for more than ten years and is currently vice-president of the Board of Trustees. This project has resulted in the construction of an elementary/ middle school for underprivileged Buddhist children that has been visited twice by the Dalai Lama, who holds it as a model for blending traditional and Western educational ideals. Much of his work for this project has involved translating at lectures for (and teaching with) the school’s founder, Geshe Lobzang Tsetan, who is currently the abbot of the Panchen Lama’s monastery in Mysore, India.

Sawyer’s interest in the phenomenon of Neo-Hindu and Buddhist groups in America led him to become a popular lecturer on topics of interest to these groups. He has taught at the Kripalu Center (Lenox, MA), the Barre Center for Buddhist Studies (Barre, MA), the Vedanta Society of Southern California (Hollywood, CA), the Esalen Institute in Big Sur, California, and other such venues. This work has also brought him into contact with several interesting and important figures in this field, including Stanislav Grof, Andrew Harvey, Huston Smith, Laura Huxley, Stephen Cope, and Alex Grey.

Sawyer has been to India eleven times, most recently while on sabbatical during the winter and spring of 2005, and has traveled extensively throughout the subcontinent: Nepal, Pakistan, Sikkim, Thailand, Cambodia, Hong Kong, and Japan.

Related to academic work Sawyer has lectured at the Kyoto University of Foreign Studies, Banaras Hindu University, the University of Riga, Latvia, the Huntington Library, and at colleges and conferences throughout the United States (interview footage of Sawyer from the Riga conference was featured in a British documentary, “Brand New World,” on the dangers of consumer culture). In August, 2005, Sawyer was a participant in the by-invitation-only conference on “Government, Education, and Religion” at the Oxford Roundtable, Lincoln College, Oxford University. He is a member of two academic societies: the Society for Asian and Comparative Philosophy (SACP) and the International Aldous Huxley Society, centered at the University of Munster in Germany.

Current Project: Sawyer is working closely with Huston Smith, noted scholar and author of The World’s Religions, to write his authorized biography.