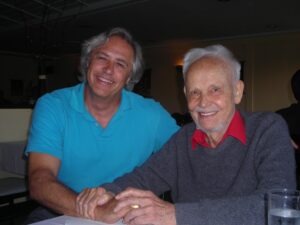 Why are we here? Is there a God? Can there be authentic mystical experience? Are Hindus and Buddhists correct that we can attain a state of enlightenment? Can psychedelic drugs give us a glimpse of it? Does religion have a viable place in the modern world? Is there a common core of values and insights among the world’s religions?

Huston Smith spent his career in a search for answers to these and other questions. Born in China in 1919, the son of Methodist missionaries, Smith followed a life-long spiritual quest that led him around the world many times. He studied the world’s religions and mystical traditions directly with Aldous Huxley, D.T. Suzuki, J. Krishnamurti, Alan Watts, Paul Tillich, Reinhold Niebuhr, the Dalai Lama, Joseph Campbell, Ram Dass, and a host of others. Huston, as a renowned philosopher of religion, helped shape the contemporary face of comparative religion, interfaith dialogue, and religious tolerance. As a seeker, he became a citizen of the world, plunging into its various spiritual traditions.

Some of Huston Smith’s books:

Dana Sawyer is the author of Huston Smith: Wisdomkeeper: Living The World’s Religions: The Authorized Biography of a 21st Century Spiritual Giant

. He is also the author of an acclaimed biography of Aldous Huxley

. He was a professor of religion and philosophy at the Maine College of Art and a popular lecturer at venues such as Esalen Institute and Kripalu. An expert in Asian religions and theories related to the perennial philosophy, he has written for Tricycle, Parabola and other magazines.