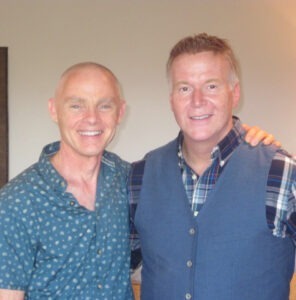 Adyashanti, author of The Way of Liberation: A Practical Guide to Spiritual Enlightenment, Resurrecting Jesus, True Meditation, and The End of Your World, is an American-born spiritual teacher devoted to serving the awakening of all beings. His teachings are an open invitation to stop, inquire, and recognize what is true and liberating at the core of all existence.

Asked to teach in 1996 by his Zen teacher of 14 years, Adyashanti offers teachings that are free of any tradition or ideology. “The Truth I point to is not confined within any religious point of view, belief system, or doctrine, but is open to all and found within all.”

Other Batgap interviews with Adyashanti:

Francis Bennett was an ordinary, sociable young man who answered the call to a life of spiritual adventure as a contemplative in the monastery of the Order of Cistercians of the Strict Observance, commonly known as Trappists. Thomas Merton, the pioneering Christian mystic of the 20th Century, was Francis’ inspiration and it was Merton’s influence that led Francis to explore the deepest reality of being, within the frameworks of Christianity, Buddhism, Advaita Vedanta and non-duality. Francis has worked with the sick and dying in parishes, hospitals, and hospices since he moved away from the monastic life. In 2010, while in the middle of mass, there came what Francis describes as, “a radical perceptual shift in consciousness”, which made it clear that the pure awareness at the heart of all is no different from the presence of God, which he had been seeking outside himself for so long.

Other Batgap interviews with Francis Bennett:

Transcript of this discussion.