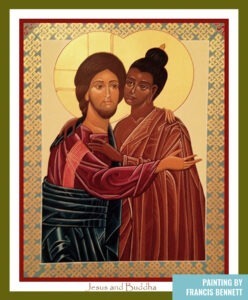 Adyashanti and Francis Bennett in a public dialog about the parallels and differences between Jesus and the Buddha, as two complementary yet very different models of awakening. Where the Buddha emphasized inner peace and the transcendence of samsara, Christ emphasized embodying divine humanity in the midst of samsara, embracing the human condition in order to serve those who are lost in ignorance.

Adya came to a deeper appreciation of Jesus by way of his study of Zen, while Francis ─ a former Trappist monk turned non-dual teacher ─ came to Buddhism by way of immersion in mystical Christianity.

“The Christ comes to disturb, to stir up the pot, to descend to the chaotic earthly realm, and to get people to move out of their limited comfort zones and indifference toward others and life in general: to help us transform and transmute the personal and social dimension of what it means to be a human being in a human society. The Buddha comes to bring inner peace by awakening us up and out of our over-identification with the personal, and help us to realize who we are in transcendence, who we are as “trans-personal” persons. You need both approaches. They are opposite sides of the one “coin” of awakening.” — Francis Bennett 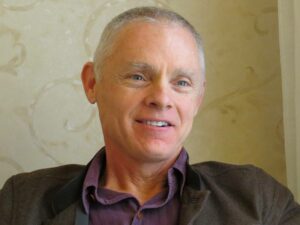 Adyashanti, is an American-born spiritual teacher and author devoted to serving the awakening of all beings. His teachings are an open invitation to stop, inquire, and recognize what is true and liberating at the core of all existence. Asked to teach in 1996 by his Zen teacher of 14 years, Adyashanti offers teachings that are free of any tradition or ideology. “The Truth I point to is not confined within any religious point of view, belief system, or doctrine, but is open to all and found within all.” He teaches throughout North America and Europe, offering satsangs, weekend intensives, silent retreats, a live internet radio broadcast, and a podcast called Being Unlimited. 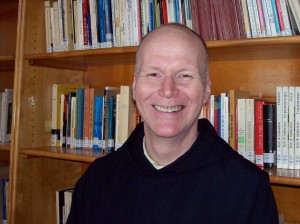 Francis Bennett entered the Trappist Abbey of Gethsemane in 1981 and in the ’90s subsequently lived at a “daughter house” of Gethsemane in Moncks Corner, South Carolina. Until recently, he was living in a small urban monastery in Montreal Quebec. He has been a “spiritual seeker” during all those years, practicing in the Christian mystical/contemplative Tradition and working deeply with teachers in both the Vipassana and Zen Traditions as well. In 2010 he experienced a profound perceptual “shift” in which he realized the ever-present presence of pure Awareness, which some would call, the Presence of God.

Francis’ book: “I Am That I Am: Discovering the Love, Peace, Joy, and Stability of the True Self