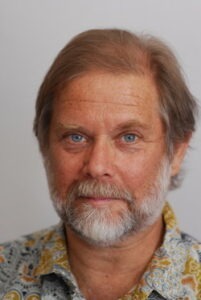 David Robert Loy is a professor, writer, and Zen teacher in the Sanbo Kyodan tradition of Japanese Zen Buddhism.

He is a prolific author, whose essays and books have been translated into many languages. His articles appear regularly in the pages of major journals such as Tikkun and Buddhist magazines including Tricycle, Turning Wheel, Shambhala Sun and Buddhadharma, as well as in a variety of scholarly journals. Many of his writings, as well as audio and video talks and interviews, are available on the web. He is on the editorial or advisory boards of the journals Cultural Dynamics, Worldviews, Contemporary Buddhism, Journal of Transpersonal Psychology, and World Fellowship of Buddhists Review. He is also on the advisory boards of Buddhist Global Relief, the Clear View Project, Zen Peacemakers, and the Ernest Becker Foundation.

David lectures nationally and internationally on various topics, focusing primarily on the encounter between Buddhism and modernity: what each can learn from the other. He is especially concerned about social and ecological issues. A popular recent lecture is “Healing Ecology: A Buddhist Perspective on the Eco-crisis”, which argues that there is an important parallel between what Buddhism says about our personal predicament and our collective predicament today in relation to the rest of the biosphere. Presently he is offering workshops on “Transforming Self, Transforming Society” and on his most recent book, The World Is Made of Stories. He also leads meditation retreats. (To find out about forthcoming lectures, workshops and retreats, please see the Schedule page.)

Loy is a professor of Buddhist and comparative philosophy. His BA is from Carleton College in Northfield, Minnesota, and he studied analytic philosophy at King’s College, University of London. His MA is from the University of Hawaii in Honolulu and his PhD is from the National University of Singapore. His dissertation was published by Yale University Press as Nonduality: A Study in Comparative Philosophy. He was senior tutor in the Philosophy Department of Singapore University (later the National University of Singapore) from 1978 to 1984. From 1990 until 2005 he was a professor in the Faculty of International Studies, Bunkyo University, Chigasaki, Japan. In January 2006 he became the Besl Family Chair Professor of Ethics/Religion and Society with Xavier University in Cincinnati, Ohio, a visiting position that ended in September 2010. In April 2007 David Loy was visiting scholar at the University of Cape Town, South Africa. From January to August 2009 he was a research scholar with the Institute for Advanced Study, the Hebrew University, Jerusalem. From September through December 2012 he was in residence at Naropa University in Boulder, Colorado, with a Lenz Fellowship.

David is married to Linda Goodhew, a professor of English literature and language (and co-author of The Dharma of Dragons and Daemons). They have a son, Mark Loy Goodhew.

An artist and healer by nature, Igor has been sharing his revelations into the essence of Being since 2002. His approach, in the form of intimate gatherings, silent transmissions, and private correspondence, is based on spontaneous and intuitive insight which allows him to empathize with the uniqueness of each individual conditioning.

Igor Kufayev was born in Tashkent, Uzbekistan. In his childhood, he had many episodes associated with awakening. At the age of thirty-six, Igor underwent a radical transformation of consciousness which subsequently blossomed into spontaneous unfoldment of Grace.

Other BatGap events with Igor: