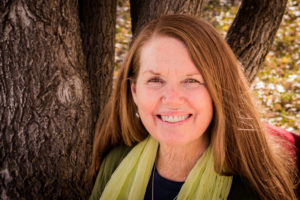 Joi was aware of the unseen magic of Presence at a very early age. She remembers being more drawn to this mystery than anything else. This led her to delve into many traditions of spirituality. After a spontaneous awakening at age 28, Joi spent two years on a blissful honeymoon of Spirit before plunging into a deep period of emotional purging and healing. Among her healers were a powerful Lakota medicine man, with whom she traveled for two years, and a group of Yogananda disciples who had developed a powerful way of unlocking unconscious beliefs using kinesiology. She worked with them 3x/week for two years. During this period that the formless aspect of the Divine Mother appeared to Joi and she began a very intense journey.

Joi met Amma in 1993, and she realized that Amma was the same Mother that had captured her heart and soul. Joi spent nine years in Amma’s Indian Ashram, and then two years in Tiruvannamalai at Ramana’s Ashram.

When Joi came home from India, she was completely exhausted, and her “seeker drive” fell away. She began sitting with Adyashanti, who helped her understand all that had taken place within her being.

Joi began teaching in 2006, with Amma’s and Adya’s blessings. Joi continues to be inspired and moved toward what Life could be if we let go to our inner potential, which is the ultimate intelligence of all creation.