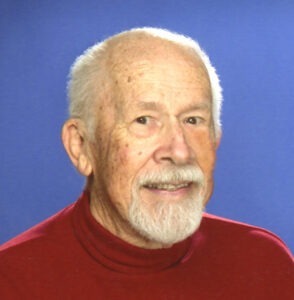 When John Samsen first contacted us several months ago, he said, “I’m 90 years old, I’ve had both my feet amputated, and I’ve never been happier”. We soon learned that John designed the Ford Thunderbird, Plymouth Barracuda, and other “muscle cars”, and later had a profound and abiding spiritual awakening.

Over a course of many decades, John Samsen followed a quest to understand the “big questions” of Life; why are we here, what is Life all about, and who am I, really? Along with careers in Aerospace Engineering and car designing, John studied the sciences, mythologies, religions, philosophies, and psychologies, to expand his understandings. A pattern of paranormal experiences opened his mind to areas of experience beyond the paradigms of Science. In 1970, he embarked on a quest of Self Discovery, participating in hundreds of hours of intensive consciousness exploration with such noted researchers as Drs. Jean Houston and Robert Masters, Dr. Lawrence LeShan, Robert Monroe, and others involved in the “human potentials” movements of the 1970s.

After a series of traumatic events in his life, John experienced a “metanoia”, what some call a transformation or “awakening”. John’s quest ended, and in the years since, he has been enjoying Life, knowing peace of mind, “unconditional love” of self and world, and freedom from fear and anxiety. John has been working on a verbal description of his experiences that does not rely on traditional metaphysical or religious ideas but is consistent with modern scientific concepts of space, time, matter, and energy. He believes that a dramatic experience of “awakening”, which is rare and very difficult to achieve, is not necessary for enlightened living; that with proper guidance and consistent effort, most people can achieve that state of being.