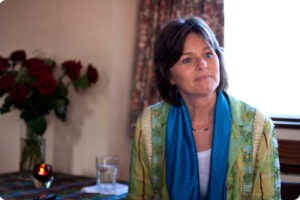 Jackie O’Keeffe was raised in rural Ireland. Wanting to know about God she studied theology and music. After graduating in the 1980’s, Jac found her studies had left her disillusioned and a non-believer.

Turning her focus to issues of social inequality, she studied adult and community education, and began her career interweaving community development with the arts. In 1997, her life changed dramatically when her sixth sense awakened. Quite spontaneously, she was able to see chakras, energy fields and auras. Moreover, she could communicate with animals and with those who have passed away.

A busy practice in healing work developed within a short time, with Jackie offering private sessions and residential retreats. She developed and delivered holistic programmes that focused on viewing depression as a spiritual awakening rather than a bio-chemical disorder. Using a variety of methodologies, her work had the primary focus of raising consciousness.

Jackie continued for seven years as a spiritual teacher, before stopping her work in 2006 and leaving Ireland to deepen her own spiritual practice. Her personal quest led to that which is beyond the mind – a transcendence of dualistic thought. Jackie now lives in Ireland and India. She facilitates spiritual gatherings in question-and-answer format, offering clear pointers to spiritual seekers of truth.

Other BatGap episodes including Jac: