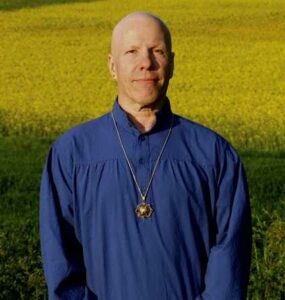 Ishvara was born in 1945 in Missouri USA and raised a fundamentalist Christian. While involved in church ministry at a young age, he became frustrated with the limitations of restricted belief. He began a quest for truth that led him to explore the great scriptures of the world, but he continually found limitations and contradictions in the interpretations of the core truths.

For ten years he owned a metaphysical bookstore on the Oregon coast, where he gave talks and mediation classes. He became widely known for his wisdom and gentle way of teaching.

In 1987 Ishvara experienced a quantum leap in consciousness, a profound awakening. Ishvara merged with Life, seeing the universe, seeing love, knowing everything without any trace of doubt. Ishvara became aware of his true being and of the significance of his awakening: a new level of existence had taken birth in human form. Ishvara could not relate his experience to anything that was recorded in any book or scripture.

His awakening did not reveal the human life to be an illusion. On the contrary, he awoke to an accelerated state of existence here on earth, where our physicalness, our very body, the experience of our human connectedness to each and everything around us, continuously evolves to higher and higher possibilities.

Inherent in Ishvara’s awakening was a clear understanding of the tremendous conditions that prevent people from realizing their true nature and living their full potential. It became obvious to him that even spiritual teachings, systems and structures that were designed to bring liberation to the individual no longer served to bring forth the next evolutionary step for humanity.

Liberated from consensus thinking, free of beliefs and concepts, Ishvara began to explore Life from his own direct experience, following only what he calls feeling-knowing.

Ishvara’s message is one of radical transformation through letting go of conditional thinking and stepping into the direct experience of Life as it is, moment by moment. Through his awakening Ishvara found that his sole purpose is embodying this new possibility with every fiber of his being. Ishvara is available to people as a living example of what is possible for all of us.

Ishvara lives in Albuquerque New Mexico. Through the nonprofit spiritual organization, Alaya, he quietly teaches a small group of students through talks and dialogues. He also leads retreats in Germany, which prove to be extraordinary events that propel individuals into an ever-deepening experience of what Ishvara calls the New Consciousness.

Audio and video below and as a Podcast.