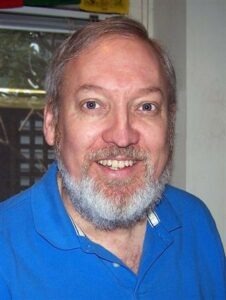 David grew up on the SW coast of Canada. In the mid-’70s, he discovered the subject of consciousness, then Transcendental Meditation (TM). This was quite a revelation. He quickly became an avid seeker, attending many talks and courses. Nine months after starting TM, he arrived in NE France for a 6-month retreat where he would train to become a teacher of TM.

After 3 months with lots of purification and clearing, he had sporadic witnessing experiences where awareness shifted briefly into an observer mode. Then in the second 3 months, the lights came on. With a blinding flash of white light (which he much later learned was makara), the witness became permanent, throughout waking, dreams and sleep. At first, he was over-attentive, keeping the mind awake to observe sleeping and manipulate dreams. But quickly that settled into a simple continuity of awareness underlying all experience.

Soon after that, the first re-cognition happened, a form of experience where everything about the object is known. This enlivens that principle in consciousness, making it easier for still others to have the same. In this case, it was hiranya gharba or the golden egg – the seed and origin of the universe. It took months to unpack the experience. Perception continued to unfold from there. At the end of the course, Maharishi Mahesh Yogi confirmed the experiences and said there would be much more.

As David returned to normal life, it became clear that Self had woken internally but had not woken up to Itself in this form yet. Self co-existed with an identified ego. But subtle perception continued to unfold in a myriad of ways.

David’s life grew into career, marriage, and family. Inner development continued but took a back seat for a number of years to the usual demands of a householder’s life. This helped ground and integrate what was unfolding and culture the platform further. Then in 2005, life made several unexpected changes. The spiritual side of life again moved to the forefront. He reconnected with some old friends. A few it turned out had become Self-Realized. After some feedback and darshan with Lorne Hoff, Self at last woke up to Itself here as well. Probably because of the long witnessing, this was quickly followed by a series of profound shifts in Being. And that in turn by transcending Being into Brahman. The unfolding continues.

Accompanying this process, writing began to help integrate what was unfolding. Then the call came to share those discoveries online under the nickname Davidya. David was present for and helped support the awakenings of many others, leading to a broad understanding of the varieties of this process. The writing evolved into a large blog discussing many of the aspects of the approach, shift, integration and embodiment of transpersonal stages of development, otherwise known as enlightenment. In 2011, David obtained a graduate degree in Vedic Science.

David has a professional background in software design and development in several industries but now works mostly with WordPress.

For this interview, rather than listening from the mind to a story, I invite you to take a different approach. Settle back into presence and notice the talking and the listening. Give the content less weight and notice the experiencing itself. This is where the magic is, in simple awareness.

About a month after the interview, David gave a talk at the Science and Nonduality conference on the stages he describes in this interview.