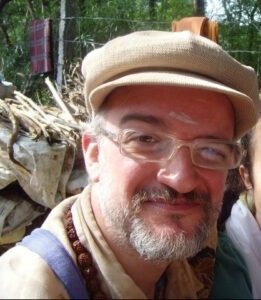 At 28 I moved to New York City, a fulfillment of a childhood dream. Oddly enough, even though I had received what I wanted on many accounts, I felt like I was having a premature midlife crisis. Interest in philosophy and psychology arose in response which brought me to The School of Practical Philosophy where I discovered Advaita Vedanta and was initiated into Transcendental Meditation (TM) three years later. Frustrated over my lack of success in my meditation, I left the school and embarked on fixing myself through psychotherapy. On a local radio station I came across Gangaji and Eli Jaxon-Bear. They were sharing the Truth they had discovered through their master, H.W.L. Poonja, a.k.a. Papaji, who happens to be Mooji’s guru as well.

Then 9/11 happened. I was deeply hurt inside. The towers that I saw burning and crumbling outside initiated the same inside me. In the days and months that followed, old, hidden pain and fear from the past emerged, but, surprisingly, I felt more alive than ever. There was an excitement about it. When no strong experience of past conditioning happened for a day, I was disappointed. How crazy is that? Somehow, something inside knew intuitively what was happening is good, that I needed to face this. As a new year’s proclamation I told friends boldly that this year (2002) I’m going to fall in love with myself. I didn’t even know what that meant. Soon after, I met Gangaji and Eli Jaxon-Bear, not personally, but at their satsangs, and other teachers of the same lineage. After many years with Stuart Schwartz, a disciple of Robert Adams, a strong desire arose in me to be with Papaji. I finally met him in and through Mooji. It was love at first sight.
When I first met Mooji I didn’t know why he says that awakening is not an event. Neither was it clear to me that this Truth we are seeking (if it is indeed Truth we are consciously after) is not anything that is created or maintained. Back then I was still under the impression that realizing Truth meant that we are gaining something new. A few months after my first meeting with my master, Mooji, the truthfulness of his statements announced itself to and in me as intuitive insight when the essence of who I am was also revealed through the power of Mooji’s pointing and presence.

Subsequently, the continuous close association with Mooji in the heart and in person as well as my own contemplation of the Truth by way of self-inquiry brought about the recognition of my true identity beyond the realm of the knowable, beyond even the “I Am,” through which we taste this existence and intuit this unfathomable, unmanifest substratum that is untouchable by worldly phenomena. What is undoubtedly known here is that abidance in this placeless place is synonymous with Freedom, and we are that Freedom itself. The recognition of this as our true Self is appreciated as humanity’s greatest potential.

Video and audio below and as a Podcast.