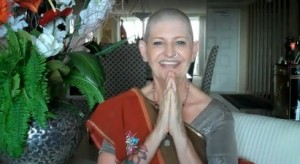 Guru Swami-G was born March 24, 1950 and started the search to find  God and Truth at a young age. Her journey began in earnest when at the  age of 18 while within an esoteric order Kundalini was awakened during the  evening prayers blessings.

The ongoing journey took numerous twists and turns through everything  from new age philosophies – scientology –  deep bible study – through a  very eclectic scenic unfolding. Life brought visiting Navaho medicine men  for ceremonial undertakings to being one of the first initiates receiving the  kalichakra buddhist empowerments in the west. The name given within  the buddhist traditions is Karma Sonam Wangmo which means one that  dedicates all their actions to the good of humanity. There has been  an immersion into not only Buddhist but also hindu traditions such  as Bhakti  (ISKON) – Tantra – Naga Shaivite and finally the Reality  of Advaita.

It was a 30 plus year journey from Kundalini Awakening until all imploded  under the Guidance and direction of her Sat Guru in india.  Guru-G was  given the admonition and challenge to go forward as a Guru to aide  humanity.  As a Kundalini Shaktipat Guru it is imperative to understand  the workings of the mind, how to bring balance to kundalini and  how to move one forward from fear and phenomena to Realization and  liberation. There is much more to being a Shaktipat Guru than simply  awakening Kundalini and the way is working one to one so the seekers  may go fully forward to Liberation versus teaching how to manifest and  be even more caught up in the transient.

Guru-G stresses a path that is within the fullness of life i.e.:since you have to  breathe, do it in a way to bring balance.  The path is about walking the way of Simplicity – Honesty – Integrity and Transparency.  Surrendering into the  transmission during Darshan.

Guru-G has two books currently out Kundalini from Hell to Heaven and also  Truth Unbound authors name is listed as Ganga Karmokar.