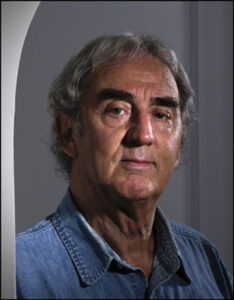 Richard Quentin ‘Rick’ Laird is a jazz musician, born on 5 February 1941. He is a bass player best known for his place in The Mahavishnu Orchestra.

Laird was born in Dublin, Ireland. He played music from a young age and enrolled for guitar and piano lessons. He started playing jazz after moving to New Zealand at the age of 16 with his father. He played guitar in jam bands in New Zealand before buying an upright bass. After extensive touring in New Zealand he moved to Sydney, Australia where he played with many top jazz musicians including Don Burrows.

He moved to England in 1962 and became house bassist at Ronnie Scott’s Jazz Club in London, playing with many greats including the guitarist Wes Montgomery and Sonny Stitt. From 1963-4 Laird then at London’s Guildhall School of Music and Drama. He was recorded on Sonny Rollins’s soundtrack for the movie Alfie and played in The Brian Auger Trinity (July 1963-February 1964) and The Brian Auger Group (Feb-October 1964).

His next step was to go to Berklee College of Music in Boston, where he studied arranging, composition, and string bass. He then teamed up with John McLaughlin and The Mahavishnu Orchestra to play electric bass until 1974, when the band broke up. After that, he moved to New York and played with Stan Getz (a tour in 1977) and Chick Corea (a tour the following year). Laird put out one album as a leader, Soft Focus. Today, he is a successful photographer as well as a private bass tutor, and an author of a number of intermediate to advanced-level bass books.

In 1962, just before leaving Sydney for London, a friend gave him a copy of J.Krishnamurti’s book “The First and Last Freedom”. This began a long journey as a seeker which included drugs, alcohol, meditation, Scientology, EST, AA, etc.

In early 2008, after reading Gangaji’s book “The Diamond in your Pocket” everything changed, what had always been there became obvious and spontaneously the seeking ended.