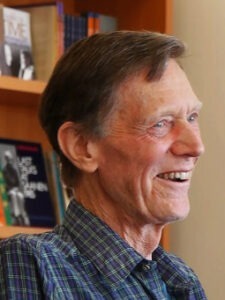 More than twenty years ago, my (second) wife and I divorced, after ten years of marriage. We both had, originally, looked forward to our years ahead with each other, and had planned for a comfortable retirement. I was in my early forties when we married, and I focused my attention on a career (as an insurance agent) so that we might further our goals. In so doing, I put aside what had been a primary interest prior to my marriage and this career: the “spiritual pursuit”, for enlightenment.

After we divorced, I recognized that I had some unfinished business: it revolved around “the meaning of life”, which is at the bottom of the spiritual pursuit—to which I returned.

As soon as our house was sold, I took my share of the equity and bought a fully-equipped camper van. I parked it on the property of an absentee friend in the redwood forest, near where I had been living in Northern California. I lived there in virtual solitude: reading, contemplating, taking walks for hours in the forest. At the end of three years, something suddenly fell into place. The spiritual quest resolutely came to an end. I discovered the actuality which is inescapable.

The inseparability of all things, which has been referred to persistently by mystic sages for 3,500 years of our written history, is commonly spoken of as “oneness” (or Oneness). There is an aspect of this oneness which is rather apparent to most any attentive mind. But the aspect which seems to give many of us some difficulty has to do with our personal, individual relationship to this oneness. This latter aspect is the matter which had now become clarified for me.

It was not that something was added to my fund of knowledge; it was that I saw the truth in what was already actually present but which had been overlooked or ignored. The situation is similar to one of those “optical illusions,” which you have probably encountered: what appears to be, say, a black candlestick and its holder is displayed against a white background. But in addition to this apparent picture is a picture which is not so apparent; if the white portion is viewed as the foreground and the black, candlestick portion seen to be its background, an entirely different picture emerges: the outline of two matching profiles whose noses nearly touch.

My relationship to the whole of existence was now revealed in a radically different light. If you were to view a fish in an aquarium, for instance, directly head on, what you would perceive would be remarkably different from what you would perceive if you were to shift your perspective so as to observe it broadsided. It would not be a different fish than it had been—and nothing would have been added to it—but your perception of it would now be thoroughly different.

This radical, and sudden, shift in perspective was received like good news by me. Where before there had been confusion and perplexity concerning the relationship of the individual to the whole of existence, now there was a calming clarity. There was a profound resolution of the uneasy questing which had punctuated my prior years, a resolution which was not transitory because it has not since been apart from my general awareness.

I hoped to share the good news, particularly with those whom I knew to have quested concurrently with myself. I knew, from my own experience, that a certain element of this unitive understanding is communicable from one mind to another; the analogy is sometimes given of a flame leaping from one torch to another torch. Probably a more apt analogy is that of a center-fielder making a throw to home plate: if the catcher is not fully attentive, there is nothing within the center-fielder’s power which will complete the transmission. But the fact that the transmission may rarely be received is not a reason for inaction.

There is a certain reasonableness, or even “logic”, to the unitive understanding—up to a point. However, in the case of this uncommon understanding, there is a point beyond which logical progression will not take you. At that point, only an intuitive connection can be made. However, once the tumblers have fallen into place, it matters not that a hairpin replaced a key.

For the past fifteen years, I have conducted a considerable number of discussions (both individually and in groups) with persons who indicated their interest in resolving—and in recognizing that they had resolved—what has been called the perennial question. I have carefully observed the junctures at which their confusion compounded. I have also observed that for a few individuals there was no point at which their confusion was not surmounted, to their satisfaction.

And, so, it is not that one first removes fear; removes attachments; and then the unitive revelation falls into place: it is that the latter is coincident with the former. This is the true marvel of the unitive realization, the effortlessness of the deconstruction.