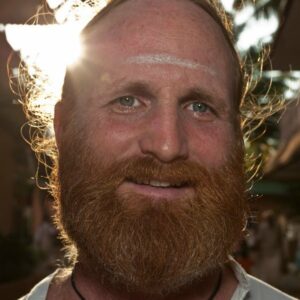 Ram Das Batchelder was born in Pennsylvania in 1961, had a spiritual awakening in his early twenties, and has spent most of the last 25 years in India as a devotee of Amma, the “hugging saint.” He has written four children’s books, which have been translated into several European languages, and also a novel in rhyming verse, three full-length plays, and 40 original songs. In 2012, he and his wife, Tarini Ma, wrote and co-taught a university course on Hinduism in Venezuela. He has given numerous talks and workshops about various aspects of spirituality in many locations around the world. He and his wife are currently offering 5-star tours of the sacred cities of India, to both Spanish and English-speaking groups.

“Rising in Love: My Wild and Crazy Ride to Here and Now, with Amma, the Hugging Saint

,” tells the story of Ram Das Batchelder’s powerful marijuana-fuelled spiritual awakening in America (which included meeting an angel), his two-year struggle with delusion and addiction, his subsequent renunciation of drugs, and his eventual discovery of Amma (the living Guru known in the West as “the Hugging Saint”). The narrative then covers the 27 amazing years he has spent in quest of Enlightenment as Amma’s devotee, most of that time in India. It is a story of profound healing from drug addiction and despair into a joyfully fulfilled life, and is, therefore, a ray of hope for all who suffer from addiction or mental illness of one kind or another. The book is a suspenseful psychological thriller, “a real page-turner” (as more than one reviewer has said), yet there is so much humor in the narrative that it reads like a comedic novel. It describes his struggles with dysentery and sexual desire during his first several years at Amma’s ashram and also includes descriptions of numerous miracles he has witnessed, a vision of Krishna, and the steady progression of his meditation, which has culminated recently in states of samadhi. It also discusses how the author left Amma’s ashram for a six-year period, visited numerous other Gurus, and then returned, with a fiancée, and was married by Amma in 2001. One chapter is dedicated to the difficulties he and his wife have faced in their marriage, and the beautiful healing Amma has given them as a couple. There is also a section about the Asian Tsunami, which occurred when they were in Amma’s ashram; hundreds were killed in the surrounding area. “Rising in Love” will appeal to anyone interested in spirituality, Enlightenment, Hinduism, Saints or Gurus, as well as psychology, psychotherapy, angels or Jesus.