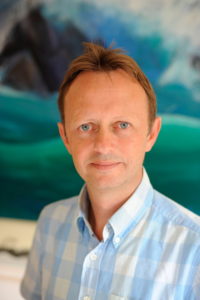 Paul was born in 1961 and lived most of life in the coastal county of Pembrokeshire, UK. He always loved the sea and aspired to be a professional football (soccer) player. One day, at the age of 15, while playing football, unbounded awareness dawned. Everything was the “ocean”. He didn’t know what this was, or whether anyone else had experienced it, but later on he discovered the Upanishads in a bookstore, which led to his joining a Vedanta Monastery for five years. For a time after that, he lived a hermit-like life. One day in meditation, a woman’s name came to him. He had never heard of her, nor did he even know whether she existed, but he knew he would marry her. He later did, opened a gallery and had two boys. He now spends his time supporting the boys and their business and chatting about the ocean.