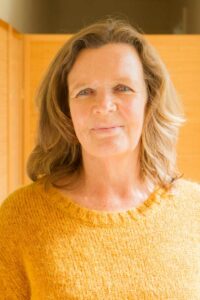 Linda was born in Sydney in 1958. She had virtually no interest in meditation or spiritual matters until at the age of 37 she was introduced to Peter Jones, an enlightened man who became her first teacher.

This meeting was an intense experience for her. There was a depth to the communication she had not experienced before, and it triggered a search for freedom, which was soon the major focus of her life.

At this time she had two teenage children and was running a small business, but she managed to make time for intensive meditation.

In 1997 she had a profound awakening during a ten-day retreat in northern New South Wales with Peter Jones. She later described the experience as ‘deeper than bliss’.

There was a marked change in her after the awakening, which was really a very strong glimpse of enlightenment. She knew now what was possible, and she also knew that she would not be satisfied until that state became permanent. She maintained the humble attitude of a student and continued to practise.

She meditated with Peter Jones whenever she could, and also regularly spent time with the enlightened teacher Barry Long. During this time she met the Japanese Zen Master, Hogen Yamahata, who also impressed her with his deeply enlightened presence and humility.

Early in 2003 Peter told Linda that she would reach the depth of enlightenment with or without a teacher. She still had a strong desire for extended periods of meditation practice, and at that time Peter was not able to offer this, so she started attending retreats led by Hogen Yamahata. For the next two years she practised with Hogen-san and attended his Zen retreats as often as possible. She was also in close contact with Peter.

In 2004 she travelled to Japan and spent six weeks at a Zen monastery with Hogen-san’s Master, Harada Tangen Roshi, known as Roshi Sama. Her time with him was intense. She sensed she was close to the culmination of her journey. She returned to Australia in a deeply detached, peaceful state. Roshi Sama gave her the name Dai’an Jishin, which translates as ‘deep peace, compassionate heart/mind’.

Her search ended during a ten-day retreat with Hogen-san at Springbrook, in the mountains behind the Gold Coast in Queensland.