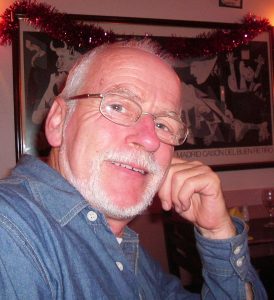 Colin was born in a staunch protestant family into the war-torn east end of London in the aftermath of WWII, where austerity and food-rationing were the norms. At the age of 11 he was sent to a Methodist boarding school and from there went to Sheffield University. So, by his early twenties finding himself in Earls Court, West London, in the late 60s when the ‘hippie revolution’ was in full swing he was fully ready to break out of the narrow confines that had dogged his life up until then. He discovered the power of high dose LSD to break the barrier between the subconscious and conscious allowing decades of religious (and social) conditioning to pour out, leaving him feeling totally cleansed as if his brain had been truly washed!  He also experimented with mescalin having read Aldous Huxley’s ‘The Doors of Perception’ and had many experiences which felt deeply spiritual in nature including ‘sitting’ above his body for hours and observing the world (and the body itself) from this vantage point. It was this that gave him glimpses as to what could be achieved by natural means which raised one’s consciousness to a ‘higher level’. He was reading Ouspensky at the time and could see that many of these experiences tallied with those that he described. He was fully convinced that Awakening was the purpose of life, but Ouspensky made the whole process sound so onerous that Colin decided to postpone the attempt and enjoy life while he was young and living in such a vibrant environment.

About ten years later his wife Janet persuaded him to accompany her to a yoga class given by an ex-Jesuit priest. who inspired us by quoting passages from the Upanishads, Dhammapada, and other scriptures during the class. He also emphasized the importance of relaxation and meditation.  There followed a few years of investigating various spiritual paths including a prolonged dalliance with the Brahma Kumaris (Raja Yoga) whose meditations were wonderful, but whose dogma he found very hard to take. They then moved into the country to start a pottery and immersed themselves in Satyananda Yoga, an organization that had no dogma but taught a wide range of yogic practices. They were both initiated into karma sannyas by Swami Satyananda and adopted a yogic lifestyle consisting of asanas, pranayama, yoga nidra, meditation, kirtan, and vegetarianism. During this time Colin was at a silent retreat when he happened to pick up a volume entitled The Gospel of Ramakrishna which introduced him to this amazing being who practiced many spiritual paths, within Hinduism and also Islam and Christianity, discovering that they all lead to the same result, and was then approached by many devotees from these various paths all of whom he was able to teach in their own path, whilst emphasizing the harmony of religions.

After ten years of meditating on Ramakrishna, having been initiated by a nun of that order, he encountered a disciple of Sri Ramana Maharshi, Gangaji, who said ‘Stop! Be still, you are already That’.  The message being that the effort and search were masking that which is always present; all that was required was to ‘stop’ and see what is always here.  After many years of struggle and effort this news came like a breath of fresh air and he glimpsed the essence, that undeniable ever-present reality.  This was followed by a seven-day silent retreat, in 1996, which resulted in his first ‘Awakening’, and in an ecstasy that slowly faded over the following year. During this time, he began to be aware of the utter simplicity of the process, especially as it became more established through repeated self-inquiry. The realization that one is the Pure Awareness that underlies the whole of life, and in fact all things, became startlingly obvious; so much so that he became increasingly disillusioned by most spiritual writings which seemed to mystify this whole subject. This created the desire to put the matter in the simplest, most straightforward, way so that anyone could understand it … and through repeated inquiry (or investigation) ‘get it’. At the time he was writing the occasional article for his email group and it was the collection of these plus a few new ones that became his first book ‘Beyond the Separate Self’. He also completed an honours double-major degree in Comparative Religion and Philosophy and his honours thesis, which considered self-identity in the world’s major religions became the basis of his second book ‘Humanity – Our Place in The Universe’. Since then, answers to questions, interpretations of spiritual writings from all traditions, and new insights gained during meditation/contemplation have been compiled and published in another fourteen books. All of these are ‘stand-alone guides’ to Awakening as they all rely on the same ‘investigation into this moment of direct experience’ which is included in them all and is explained in full in each introduction. They have all also been converted into books of poems, one per chapter. For the full list visit Beyond Awakening Publications.

They can be purchased in paperback and .pdf formats from lulu.com and in kindle from amazon.com. You are all welcome to visit his Facebook page where he posts poems, new articles, and photos of nature taken in his natural environment of sub-tropical rainforest with ocean views. Finally, all are invited to join his email group by contacting him at colinj108@gmail.com.

If you are trying to open the links with a phone and they won’t open, click on the three dots in the far right-hand corner of the failed opening screen and click on ‘open in Chrome’ (or any other browser).