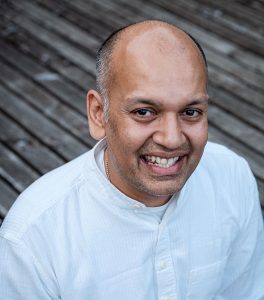 Nipun Mehta is the founder of ServiceSpace, a global community at the intersection of technology, volunteerism, and the gift economy. Most recently, ServiceSpace’s pandemic response has showcased the unique beauty of its global ecosystem. Nipun has catalyzed a global social movement of community builders grounded in their localities and rooted in practices for cultivating love, nonviolence, selfless service, and compassion. The ecosystem has reached millions, attracted thousands of volunteers, and mushroomed into numerous community-based service projects as well as inspiring content portals. ServiceSpace harnesses the collective power of networks and our deeper interconnectedness to create a distributed social movement founded on small, local individual acts of kindness, generosity, and service that ignite shifts in individual and collective consciousness. Nipun was honored as an “unsung hero of compassion” by the Dalai Lama, not long before former U.S. President Obama appointed him to a council for addressing poverty and inequality in the US. Yet the core of what strikes anyone who meets him is the way his life is an attempt to bring smiles in the world and silence in his heart: “I want to live simply, love purely, and give fearlessly. That’s me.”

In his mid-twenties, Nipun quit his job to become a “full-time volunteer”. One of his most formative experiences was a walking pilgrimage across India, with his wife of six months, whose profound lessons also became the subject of his widely-read address at UPenn commencement. Over the last twenty years, he has addressed thousands of gatherings around the world, speaking next to wide-ranging leaders from Apple co-founder Steve Wozniak to author Elizabeth Gilbert to civil rights legend John Lewis. Germany’s OOOM magazine named Nipun one of the Top 100 Most Inspiring People of 2020.

See links to these ServiceSpace websites at the bottom of their website.

And for some of Nipun’s talks and articles, visit his personal website.