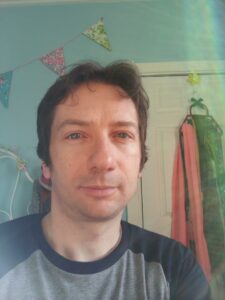 Noah Samarkand (formerly, and referred to in the interview as Choboji) was a truth seeker from an early age. His approach has been one of meditation and creativity; uniting the relative and the ultimate truths. After many years of seeking he had an awakening experience that left him in constant awe of the world, and in a state of ‘not-knowing’. While this was exceptional, something remained incomplete until he met his master Mevlana Mooji.

Noah preferred to remain alone and anonymous. Any teachings or Satsangs were private one-on-one sessions, but after many requests to write and teach he wrote his first book Melody and Silence: The Selfish Bodhisattva and began public Satsangs.

Integrating one’s inner truth and living in the world is an important aspect of Noah’s work. He is currently setting up a theatre company, studying drama, writing plays and running workshops in acting and performance.

‘It is important to make one’s life a dance or a work of art. To be fluid enough to be silent as a still lake, and then as gregarious as a party host, then as compassionate as a mother, then as creative as a painter. In short, your life can be a multidimensional, fun-loving, masterpiece of silent nothing.’