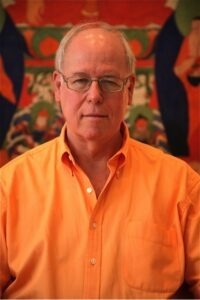 Bruce Joel Rubin is an Oscar-winning screenwriter for the film Ghost.   His films include Jacob’s Ladder, My Life (which he also directed), Brainstorm, Deep Impact, Stuart Little 2, The Last Mimzy and The Time Traveler’s Wife, among others.   His spiritual journey began with a massive overdose of LSD in the 1960’s.   Shortly afterward he began hitchhiking around the world in search of a teacher and then found him in New York City, just blocks away from where he began his search. His name was Swami Rudrananda, also known as Rudi. Rudi was a New York City businessman and a yogi who taught a form of Kundalini meditation he called The Work. Rudi died in 1973 but Bruce continues to teach his practice. In 2001 Bruce discovered I AM THAT – the teachings of Nisargadatta Maharaj, and fell into the world of non-dualism. He awoke in 2010 during a seminar on awakening led by Bart Marshall. Since that time he has continued to teach meditation and the effortless nature of simple Being. Since most people work and struggle in the world, it seemed to Bruce that meditation was a significant tool for living a good and productive life while waiting for awakening to make itself known. Bruce teaches in San Rafael, CA, in Los Angeles and in New York.