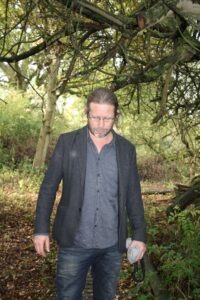 I grew up in a hard-working family, none religious. At the age of 18, I learned that the Father I’d known all my life was not, in fact, my biological Father. This new-found fact destabilized the identity I had become accustomed to. The idea of who I was came under question. I was left asking, who am I. What then followed was ten years of drinking. At 27 I found myself in recovery from alcoholism. I spent three and a half years examining all the aspects of self-identified traits in order to find an honesty that would propel me into a more productive direction. After three and a half years I came to see that all willful attempts at modifying the self still remained within the paradigm of self-will. I had not transcended into honesty. It was at this point in a room one evening in 99 that I handed all attachment to the mind for any orientation to ongoing recovery. In doing so, not knowing what lay beyond, there was to be a complete self-realization.