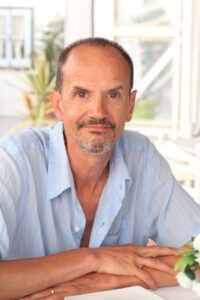 Arjuna Ardagh is an awakening coach, writer and public speaker, who also trains others to become facilitators of awakening.  He is the author of seven books, including the 2005 #1 National Bestseller The Translucent Revolution, which was featured in “O” magazine. His new book Better than Sex is the complete introduction to Awakening Coaching.  His novel The Last Laugh will be republished by Hay House in spring 2013. He is also the creator of several online courses, including Living Awakening, and The Deeper Love.

Ardagh has been a keynote speaker at conferences all over the world, including the International Conference on Business and Consciousness, the “No Mind” Festival,” the Whole Life Expo (in 5 cities), the Integral Spiritual Experience Conference, and the Omega Institute annual conference. He has appeared on TV, on the radio and in print media in seventeen countries.  He is a member of the Transformational Leadership Council.

Arjuna was educated in England, at Kings School, Canterbury, and later at Cambridge University, where he earned a master’s degree in literature.   Since the age of 14, he has had a passionate interest in spiritual awakening, and he began to practice mediation and yoga at that time. In his late teens, he trained as a meditation teacher. After graduating from Cambridge, Ardagh devoted himself completely to the call he felt inside, and studied and lived with a number of great spiritual teachers, both in Asia and the United States. In 1991 Arjuna met his teacher, H.W.L.Poonja, a retired army officer in Lucknow India, with whom he passed through a radical shift in consciousness.

Arjuna started to train facilitators in 1995, in order to create an environment where awakening can happen outside of the usual patriarchal and hierarchical context: as friends supporting friends. The same work has now evolved in the Awakening Coaching Training, where most of the courses are offered online, thus bypassing the need for students to travel and take time away from their other responsibilities. Arjuna has trained more than 1100  facilitators of awakening since 1995.

Arjuna Ardagh is the creator of several online courses. Through high-definition video interviews with 40 remarkable people, Living Awakening shows us how states of inner awakening can become the stable foundation of enlivening and giving the Unique Gift each person was born to share.  Arjuna and his wife, Chameli Ardagh, have created The Deeper Love, which teaches singles and couples how to integrate awakening consciousness into intimate relationships.

Arjuna and Chameli live in the Sierra Nevada Mountains of Northern California, with their two teenage sons.

You can find out more about Arjuna Ardagh at arjunaardagh.com, and about awakening coaching at awakeningcoachingtraining.com.

Other books and media: