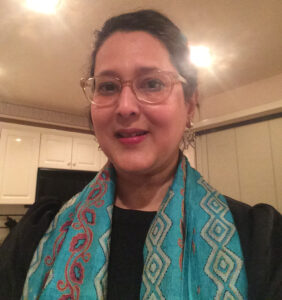 Ameeta was born and raised in Mumbai India and recalls two predominant family themes which influenced her formative years: intellectual curiosity and devotion to God. She was educated and conditioned to aspire to conventional success, which pursuit dominated the first three decades of her life.

She consciously experienced the first stirrings of her deepest yearning following the cancer diagnosis and subsequent death of her father in 1999. Questions opened up in her like “What is life?”, “What is death?”, and “What is going on?”.

From then on, Life orchestrated a series of events and experiences which placed her and nurtured her, on an overt spiritual journey. The major influences along the way were Ken Wilber, Byron Katie, and Adyashanti. It was with Adya that she finally found what she was looking for, in terms of his spiritual guidance which has always resonated in her being, in terms of his living example which continues to inspire her, and most especially in terms of what those two brought alive and online within her.

What she now sees clearly is that it was the Heart Sutra teaching of Emptiness is Form and Form is Emptiness, which is the meta-story of her life and existence.

In 2017 she received her Soul name of Moving Mountain in Taos. And this opened a new facet on her journey, where she experienced deep communion with Nature and a tangible connection with Goddess.

Ameeta’s path has been gradual and studded with many life-altering realizations, which illuminated her self-knowledge, and which continue to translate into how she lives and relates in the world. She likes to say she is eternally a work-in-progress.

Over the years she has been sharing her experience with small groups and coaching spiritual seekers one on one. Now she is called to share her message more broadly through Moving Mountain Academy.