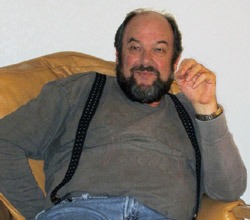 Wayne Liquorman was both a spiritual seeker and a family man with a successful export business, when he met his first and final guru, Ramesh Balsekar, in September 1987. In April 1989 the process of seeking ended when enlightenment happened through the body-mind mechanism called Wayne.

Wayne describes the event as being “of interest only to seekers.” His first book, No Way: A Guide For the Spiritually ‘Advanced’ was published in 1990 under the pen name Ram Tzu because he “didn’t want a bunch of miserable seekers cluttering up his living room.” In fact, Wayne did not speak publicly until Ramesh asked him to do so in 1996.

This enlightenment event and its aftermath are described in Wayne’s second book, Acceptance of What IS, published in 2000. He is also the author of Never Mind… A journey into Non-duality, and the editor of Consciousness Speaks and several other books by Ramesh Balsekar, who refers to Wayne as his “spiritual son.” His most recent book, Enlightenment Is Not What You Think, was published in 2009.

The teaching, as it happens through Wayne, is pure Advaita (non-duality), uniquely presented in a uncompromising, sometimes humorous way, without religious dogma or new age veneer. In his Talks, Wayne is without agenda, speaking only in response to seeker’s questions. He talks about Consciousness: the ground of all being, the source and the substance of everything.

“This Advaita, as I talk about it, is not actually a philosophy, because it does not hold any tenets. It is simply a collection of pointers and concepts, and it posits that none of them are true in an absolute sense. This teaching is not about conveying the truth. It is about prying away the limitations and misconceptions about how things are.” – from Never Mind

Wayne’s message is clear and simple. Although he may suggest areas for further inquiry, Wayne offers no cures, practices, or miracles to reach enlightenment. He invites you to bring your most cherished beliefs to his Talks. If you are really fortunate, you may leave without them.