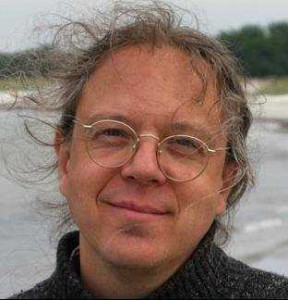 Jan was born 1960 and grew up in Bury, England. His parents were Danish. In 1967 the family moved to Denmark. Jan’s dad is an engineer and there was no spiritual influence from either parent. Yet Jan showed strong spiritual yearnings since an early age. Jan trained as an artist under the Danish painter Niels Hermann Wamberg; he also studied art restoration at the Royal Academy in order to learn the traditional craft. Jan also studied at the university and acquired an MA in history of modern culture. Today Jan works as a full-time professional artist and also has a software company developing photo retouching plug-ins for Photoshop.

After doing Transcendental Meditation and the TM Siddhi Programme for six years, Jan felt the need for a guru and found Gururaj Ananda Yogi whom he stayed with for three years. Then Jan’s Kundalini was so active, that he did not need any other guidance than what the Shakti gave, so he gave up on gurus and meditated by observing the inner Shakti’s workings. Following this, Jan began to be contagious and the Kundalini might spontaneously awaken in those that meditated with him. After some years, Jan met Amma and related to her as a spiritual master for about ten years. But again the Shakti guided Jan to meditate on his own and follow the inner guidance of the Shakti. Today Jan would describe his spirituality as being grabbed by Mother’s grace. The Divine Mother who resides in everybody as Kundalini Shakti and patiently waits to unfold as a vibrating field of love, bliss, and grace.