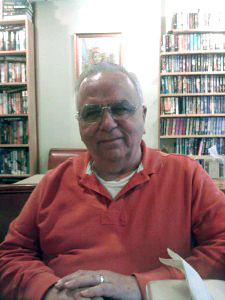 I had been a seeker for most of my life. I began to meditate in 1973 and followed that path for the next 28 years. In 1983 I had a very intense Near Death Experience that left me with a very unattached view on the seriousness of everything. A separation and subsequent divorce in 1991 left me without a reason to continue doing what I had been doing. After visiting Fairfield, Iowa twice a year from 1989, my new wife Cindy and I moved here in 1999, as it was the next obvious thing to do. Our old life had ended and this was a chance to start a new chapter. We jumped right into the group meditation program in the Domes at Maharishi International University but also were fascinated by the fact that Fairfield was Grand Central Station for just about every spiritual teacher on the planet. After sampling the various flavors of all the folks passing thru it seemed obvious that Andy Rymer was the next thing to pay attention to. I found Andy to be a very powerful force and can see his influence on me to finally get that I was awake and had always been awake. From the summer of 2001 through 2010 I kept busy nurturing a group satsang in my home and participating in an informal spiritual discussion group at Revelations Coffee Shop most afternoons as a 12-step program for seekers.

Video and Audio below. Audio also available as a Podcast.