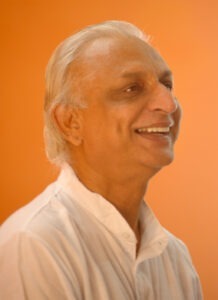 Sri M – spiritual guide, social reformer and educationist – was born into a Muslim family on November 6, 1949 in Thiruvananthapuram, Kerala. His transformational journey, from a young boy to a living yogi, is a fascinating story symbolized by single-minded discipline and dedication.

Entranced by mystical stories of Sufi saints and a brief encounter with a numinous Swami at a relatively young age, he was not only drawn to the ‘truth’ but also the compelling landscape of the snow-clad Himalayas. At the age of nine, his spiritual transformation was initiated by his future Master, Babaji (also known as Maheshwarnath Babaji), who miraculously appeared under a jackfruit tree in the compound of his house in Thiruvananthapuram. Though only fleeting, this meeting definitively set the stage for their future reunion in the Himalayas at Sri M’s age of nineteen.

The next three and half years, he lived and travelled extensively through the Himalayas with his Master. Maheshwarnath Babaji guided him right through his initiation, his Kundalini awakening, the grueling journey to Tholingmutt and, the eventual meeting with the Grand Master, Sri Guru Babaji also known as Sri Mahavatar Babaji.

A few years after his Master passed away, he received the spiritual go-ahead to commence his mission. In 1998, he started his teachings, eventually leading to formation of the Satsang Foundation.

In response to a query on the spiritual progress of a person and the path to that evolution, he responds, “Though, my parampara is kriya yoga, I don’t think it suits all aspirants. I propound satsang even between two people. It cuts across barriers of caste and creed. Spiritual evolution is not diverse from regular living. Intervals of solitude are necessary but you cannot shut yourself totally. The world around you is your touchstone to spiritual practice.” Conversant with teachings of most major religions, Sri M says: “Go to the core. Theories are of no use.” His message seeks to transcend the outer-shell of all religions, by exploring their mystical core to nurture the innate goodness in every human being.

Discussion of this in interview in the BatGap Community Facebook group.