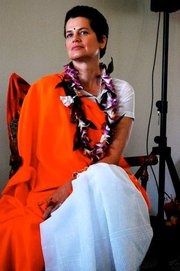 Siddhananda’s journey began in her teenage years. It wasn’t until she was around 30 that her journey and seeking of truth began in earnest.

At this time, Spiritual practices were picked up on her own, and Kundalini spontaneously awakened due to a sincere prayer of wanting to be of service to humanity. She was not prepared or had any idea what this awakening would open or where it would lead.

With this awakening, many phenomena, shifting states of consciousness and radical mood changes manifested which left her extremely ungrounded and shaken. After a long period of struggling to understand what was taking place and being unsuccessful at coming to any balance or peace within, Siddhananda found her Guru, GuruSwamiG.

Siddhananda has been with her Guru for 10 years. Increasing stability, deepening states as well as balance slowly filtered in during this time  due to  her Guru’s  grace and guidance.

Recently, a profound shift took place in which all sense of separation and individuality suddenly dropped. Spontaneously, a starkly different reality was revealed–an immediate non-dual, pure beingness in which there never existed an “other”.  This presence (One without a second) has remained and is known without a doubt that it is the truth of what all of humanity truly is at the core.