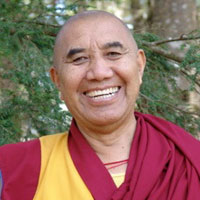 He is a Tibetan Buddhist monk from Ladakh, India, who has lived and taught in the United States for more than fifteen years. He began his monastic life at age seven in Stok, his family village.  At age thirteen he joined the Stok Monastery to study and memorize Buddhist scriptures.

In 1952, when he was sixteen years old, he walked with his father from Ladakh to Shigatse, Tibet, to enter the famous Tashi Lhunpo Monastery. The 800-mile trek took them over two months to complete. Khen Rinpoche Tsetan received his novice monk vows there and studied Buddhist philosophy at the monastery’s Skilkhang College with many prominent Tibetan scholars.

His dream was to receive the Geshe degree in Buddhist philosophy, similar in level to that of the Western Ph.D. This dream was deferred for him when the Chinese government intensified its policy of cultural genocide on occupied Tibet in 1959. The daily public humiliation and torture of monks by Chinese officials and the mass destruction of the monasteries and colleges made it impossible to continue the pursuit of this degree in Tibet. He was forced to return to his homeland of Ladakh in 1960.

Once back in the village of his birth, he studied tantric practices and joined the School of Buddhist Philosophy in Choglamsar where he studied for seven years. Due to the fact that the Buddhist tradition in Ladakh is dependent on the Tibetan lineage of teachers to transmit and bestow higher Buddhist degrees, it was necessary for him to leave Ladakh again in 1970 in pursuit of the Geshe training.

This time he went to Varanasi, India, where many high lamas in exile had resettled and built new monastic colleges. There he received his Shastri degree, the equivalent of a bachelors. Afterward, he felt a responsibility to return to Stok and contribute to his community through teaching.

From 1974-1978 he taught high school in Ladakh. Then he met with a special invitation to come to the United States and teach at the first Tibetan Buddhist learning center in America, Labsum Shedrub Ling, in Washington, New Jersey. He went in hopes of learning English and completing his Geshe degree studies. He accomplished both, and in 1984 he returned to the Drepung Monastery for commencement.

Since that time Khen Rinpoche Tsetan has been living and teaching in the United States from October to June and returning to Ladakh during the summer months to oversee activities at the Siddhartha School/Choskor Stok school he founded in 1996. While in the States, he has divided his time between Maine and New York City with additional teaching trips to Amhurst, MA, and other areas of the U.S.  His association with the Manjushri Center in Amherst has provided him with extensive teaching positions and lecturing opportunities at a number of schools including Smith, Bowdoin, Amherst, Hampshire, Drew, Maine College of Art, Bangor Theological Seminary, Phillips Exeter Academy, Deerfield Academy, and others.

In 1996 shortly after founding the Siddhartha School in Stok, His Holiness the Dalai Lama, appointed then Geshe Tsetan to be the Abbot of the new Tashi Lhunpo Monastery in India. This was a great honor for him, and one that was humbly set aside so that he could devote himself completely to the Siddhartha School. The Dalai Lama gave his blessings and support.

However, in 2005 H.H. the Dalai Lama again asked Geshe Tsetan to accept the Abbot position. In July 2005 Geshe Tsetan was installed as Khenchen, or head Abbot, of the Tashi Lhunpo Monastery in Bylakuppe, in southern India.

His title became Khen Rinpoche Geshe Kachen Lobzang Tsetan, and he has assumed his new responsibilities, over-seeing the Tashi Lhunpo Monastery in exile. Since summer 2005 he has worked ceaselessly to fulfill the charge of increasing the number of monks at Tashilhunpo, the poorest of the Tibetan monasteries in exile, and of raising the funds for their support.