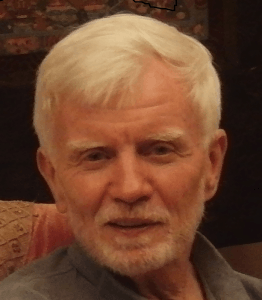 Biographies seem to be of intense interest to many folks. It is not clear what purpose they serve, positive or negative, but as others include them, here is one.

It is important to remember that a biography is only one version of the story, always remembered incorrectly, even if the intent is “total” honesty. Recent brain studies have shown that the brain modifies long-term memories and that they are not what was actually recorded by the mind, which was already highly subjective and selective. It is in the third person as it really didn’t happen to “me”.

Following a near-death experience in the military, he became intent on deeply exploring what was possible to bring understanding to life, to personally experience “enlightenment”, and to end the mental turmoil and suffering he experienced and saw in those around him. One day, reading what turned out to be a famous Zen poem that he had happened upon “by accident”, the normal world fell away and he was in a state never before experienced and beyond any context, he knew. After some time the state passed, but he was left with a burning desire to return to whatever it was that he had experienced. He went deeply into Zen meditation, and then various yogas, first so that he could sit for longer periods and then to work with the body to further inquiry.

When he finished graduate school and became a scientist at a national research center, he continued to take teachers’ training courses and studied with different yoga and Zen teachers and philosophers. Arising daily, hours before work, he would meditate and do yoga asanas, and at night would meditate, do yoga and read philosophy. Several times, he taught yoga and meditation wherever he was, but, despite the interest of the students, he would ultimately stop as he knew that he had not achieved full understanding.

This process continued for over 25 years through a series of jobs in different industrial companies eventually reaching the senior executive level of a major company with 1000 folk, 4 research laboratories and a budget of $260M; children were raised, went off to college, etc. During this time, there were many experiences and “enlightenments”, but nothing that was lasting, that really touched the core of reality or that ended the suffering brought about by thought.

One day, after having consciously surrendered every attachment, and given up completely on being able to reach the final understanding “by his efforts”, doing an asana done thousands of times before, a complete shift in consciousness occurred in which self-referential thought fell away and all that happened, happened in stillness and presence. He realized that he was not this body, nor these thoughts, but the undying consciousness behind them. He saw that everything was perfect as it was and that all was somehow within him, and that simultaneously everything was God.

This shift was so complete and radical that he soon left his executive position, did many silent retreats and visits to Zen masters, and yoga teachers in the U.S. and India to confirm and deepen his understanding. To further test his understanding, and to see if it was possible to function successfully from an awakened state, he took other complex, high responsibility, upper-level management positions in fields in which he had no previous experience, and was successful.

During this last period, at the urging of students, other yoga teachers, and a Zen master, he began teaching again.

Since then, he has taught, authored two books, a blog, several articles, numerous videos, interviews, and presentations on nonduality and neuroscience at various conferences and universities. He has been a subject and/or collaborator in cognitive neuroscience and meditation studies at Baumann Institute, IONS, CSNSC, Yale, Johns Hopkins, and Penn State.

All of these experiences really happened to no one, and they ultimately really mean nothing. The events were created out of the control of any “I” and arose from nothingness and went into nothingness. Attaching any importance, ownership, or personal causation to these events is incorrect. However your spiritual path unfolds, it will certainly be different from this one.

As one of his Zen teachers said frequently, “Whatever happens to you is none of your business”. Or, as the poet Rumi has said, “Your life is not your own”.