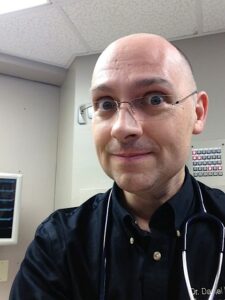 Daniel Ingram is the author of Mastering the Core Teachings of the Buddha: An Unusually Hardcore Dharma Book, is one of the founders of the Dharma Overground, has been a speaker and interviewee on Buddhist Geeks, and practices Emergency Medicine as a physician. He is highly influenced by the practices of Mahasi Sayadaw, but his interest in the dharma is much more pragmatic than dogmatic and draws on a wide range of sources.

Longer, more tongue-in-cheek bio: Daniel is an extroverted Gen X intellectual. He is known for his pronounced enthusiasm, lip-flapping, grandiosity, eccentricity, and calling people on their stuff and shadow sides regardless of whether or not this is helpful or even accurate. He is an arahant and has a solid mastery of the basic concentration states from the first jhana to Nirodha Samapatti, including the Pure Land Jhanas. He also has a solid knowledge of Buddhist theory and the texts, and because of these three areas of expertise considers himself a qualified teacher. He was also authorized and encouraged to teach by a lineaged abbot of the Mahasi Sayadaw tradition. When it comes to insight practices, he has standards so high, exacting, and uncompromising that only those who are dedicated practitioners are likely to find them helpful. On the other hand, he is a firm believer that if people simply practice the basic techniques recommended by the Buddha they can be very successful and awakened meditators. He is one of the rare teachers who will talk about insight directly and answer nearly any question about dharma practice without using code, covering things up or watering things down. Daniel is a diehard Mahasi Sayadaw fan, though he is very happy whenever he sees people trying to master any of the world’s great mystical traditions and thus considers himself a pan-mystical evangelist. He is also a chronic map-monger and technique freak because he has had them work very well for him. He does not claim to have any special knowledge of how to live skillfully in the conventional world but has found that a positive attitude, non-pretentious kindness, and a sense of humor will take you a long way. If you imagine that you want to bust out some hardcore practice but are in fact just looking for a daddy, shrink, social worker, or someone to help you prop up your self-esteem, Daniel is unlikely at this stage in his development to be the best person to help you meet your needs. He considers himself to be one badass Dharma Cowboy and prefers similar company or at least those who aspire to be so.