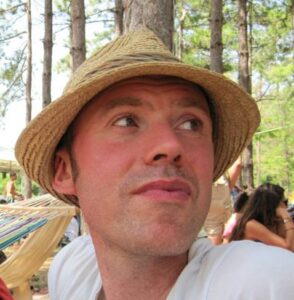 Until two years ago, my only interest in spirituality was self-improvement. I wasn’t interested in what was true, only to make my experience better. For whatever reason, I just didn’t care. About five years ago I turned abruptly away from any kind of self-improvement. I had felt a shift in my being, and I knew the ‘unknown’ was chasing after me. I intuitively knew that If I explored my experience, I would be broken open and transformed in some way. So I found subtle ways of avoiding myself. I avoided immersing myself in nature which I had previously gained so much nurturing from. At the same time my being began to change where I was shifting into a place where I felt a deep trust in life, even though there was no conscious recognition. I just felt good about life and being alive.

So I was very happy with my life, and I felt It was being refined and would only get better. I would have these days or hours where certainty would fall away, but somehow it just seemed natural. Then at the start of Feb 2013 year, a catalytic process began from a single moment. For the first few days, I was fine but after a few more days I had completely given up hope on everything. I knew that I would not get what I needed through my life as it is, and I intuitively knew I was in a process that could not be stopped. I knew I could not escape, so I gave up simply because there was nothing else to do. I remember saying to my close friends ‘I’m dying’. It was the only thing I knew. Then after a week, I had a sense that I had to calm my mind a little. That evening I was sitting on my bed reading a book by Adyashanti called ‘The End of Your World’. As I read a sentence that ended in ‘and you are not your thoughts’, a switch turned on in my being, something fell away, and I just knew I wasn’t my thoughts. I remember I kept saying aloud ‘I’m not my thoughts’ again and again. At some point, I then asked ‘then what am I’ (I’d never asked myself this until now), and in some way, I began to recognize being was ‘one thing’. The experience was In a minuscule way intellectual, it was mostly a physical experience. My body had more energy flowing through it than ever before and felt insight was experienced at regular intervals. At the same time as the opening, a movement arose that knew there was more to fall away. The last two and a half years have been about that falling away, about living a human life from truth.

Some of Chris’s music.