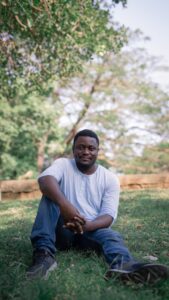 Bayo Akomolafe (Ph.D.) considers his most sacred work to be learning how to be with his daughter and son, Alethea Aanya, and Kyah Jayden – and their mother, his wife, and “life-nectar”, Ijeoma. “To learn the importance of insignificance” is the way he frames a desire to reacquaint himself with a world that is irretrievably entangled, preposterously alive, and completely partial.

Bayo was born in 1983 into a Christian home, and to Yoruba parents in western Nigeria. Losing his diplomat father to a sudden heart complication, Bayo became a reclusive teenager, seeking to get to the “heart of the matter” as a response to his painful loss. He sought to apply himself to the extremes of his social conditioning, his faith, and his eventual training as a clinical psychologist – only to find that something else beyond articulation was tugging at his sleeves, wanting to be noticed. After meeting with traditional healers as part of his quest to understand trauma, mental wellbeing, and healing in new ways, his deep questions and concerns for decolonized landscapes congealed into a life devoted to exploring the nuances of a “magical” world “too promiscuous to fit neatly into our fondest notions of it.”

A fugitive to manicured disciplinarity in the academe, speaker, and proud diaper-changer, Bayo leads an earth-wide organization (The Emergence Network) as its Chief Curator and Director. The organization is set up for the re-calibration of our ability to respond to civilizational crisis – a project framed within a feminist ethos and inspired by indigenous cosmologies. He considers this a shared art – exploring the edges of the intelligible, dancing with posthumanist ideas, dabbling in the mysteries of quantum mechanics and the liberating sermon of an ecofeminism text, and talking with others about how to host a festival in Brazil – and part of his inner struggle to regain a sense of rootedness to his community. He also hosts a course (We Will Dance with Mountains) among other offerings.

In short, Bayo has given up his longing for the “end-time” and is learning to live in the “mean time”. In the middle, where we must live with confusion and make do with partial answers. His greatest vocation is, however, learning to be a satellite orbiting his greatest gift, his goddess Ijeoma, and knowing the blessings of her gravity.

Bayo is visiting professor at Middlebury College, Vermont, and has taught in universities around the world (including Sonoma State University California, Simon Frasier University Vancouver, Schumacher College Devon, Harvard University, and Covenant University Nigeria – among others). He is a consultant with UNESCO, leading efforts for the Imagining Africa’s Future (IAF) project. He speaks and teaches about his experiences around the world, and then returns to his adopted home in Chennai, India – “where the occasional whiff of cow dung dancing in the air is another invitation to explore the vitality of a world that is never still and always surprising.”

Bayo has authored two books, ‘We Will Tell Our Own Story!: The Lions of Africa Speak!

’ and ‘These Wilds Beyond Our Fences: Letters to My Daughter on Humanity’s Search for Home

’, and has penned forewords for many others.