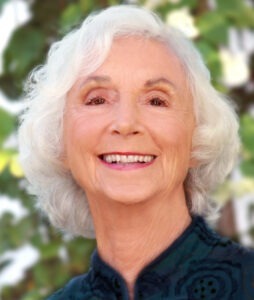 Barbara Marx Hubbard has been called “the voice for conscious evolution of our time” by Deepak Chopra and is the subject of Neale Donald Walsch’s book “The Mother of Invention: The Legacy of Barbara Marx Hubbard and the Future of YOU.” A prolific author of 7 books, visionary, social innovator and educator, she is founder of the Foundation for Conscious Evolution. Its purpose is to accelerate our conscious evolution.

. As a global ambassador for the conscious evolution movement she partnered with The Shift Network and formed a team to co-produce the world-wide multi-media event entitled, “Birth 2012: Co-Creating a Planetary Shift in Time” on Dec. 22, 2012 – a historic turning-point event; awakening the social, spiritual, scientific, and technological potential of humanity.

Currently she is developing on-line courses on conscious evolution and cocreation on the Shift Network reaching many 1000s of students world-wide. She is activating The Wheel of Cocreation as a model for social synergy and whole system shift, with examples developing in Cairo, Egypt, in Monterrey, Mexico, as well as in Chicago and Tampa, Florida.   Her seminal book “Conscious Evolution: Awakening the Power of Our Social Potential” will be republished in an updated version in January 2015. Also her new “Evolutionary Testament: An evolutionary vision of the future inspired by the Gospels, Acts and Epistles,” will be published on January 2015.

In 1984 her name was placed in nomination for the Vice Presidency of the United States on the Democratic ticket, calling for a “Peace Room” to scan for, map, connect and communicate what is working in America and the world. She also co-chaired a number of Soviet-American Citizen Summits, introducing a new concept called “SYNCON to foster synergistic convergence with opposing groups. She is a co-founder of The Association for Global New Thought and The World Future Society.