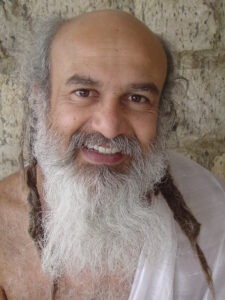 His teachings are simple, but profound:

His Holiness Shri Shivarudra Balayogi (affectionately known as Baba Maharaj) is a Self Realized Yogi – one who has completed the path of Yoga and attained union with the Supreme Consciousness. A direct disciple of Shri Shivabalayogi Maharaj, He entered His Guru’s service at the age of 19 and was later initiated into Sanyas, a monastic life of pure devotion and service. He was placed in charge of the Dehra Dun Ashram where He spent 20 years absorbed in intense spiritual practice, combining selfless service, devotion to His Guru and deep meditation.

Following the Mahasamadhi (the passing from this world’s physical form) of His Guru in 1994, Shri Shivarudra Balayogi was initiated into the spiritual practice of Tapas, in which He meditated for an average of 20 hours a day continually for the next 5 years. The culmination of this was the attainment of the goal of all spirituality – Self Realization, the permanent union of the mind with the Supreme Peace of Infinite Pure Consciousness.
He now travels the world carrying on His Guru’s mission of teaching dhyana meditation, true devotion and selfless service. Baba Maharaj is the embodiment of gentleness and compassion. His life itself is His teaching: devotion, selfless service to humanity and unrelenting effort in striving for spiritual perfection.

Shri Babaji offers initiation, freely and without obligation, into the technique of dhyana meditation which He used to achieve Self Realization. He engages audiences worldwide with His profound spiritual insight, drawn from deep personal experience rather than scriptural study. His teachings are the purest form of the sublime philosophy of Self Realization taught by the ancient Sages of India.