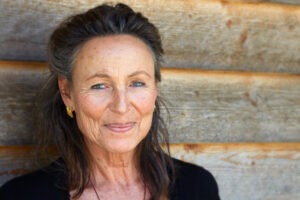 Annette Kaiser was born in Zürich, Switzerland in 1948. She is a spiritual teacher, founder and spiritual director of the retreat center Villa Unspunnen in Switzerland. Under her guidance, this place has become a gem of peace and light, that inspires many people in their spiritual work. She is a visionary of a Universal Spirituality and has written more than ten books. After completing her studies in economics and sociology at the University of St. Gallen (Switzerland), she worked for many years in the field of development cooperation. Her special fields were the women`s cause and intercultural dialog. During 17 years, she was a student of Irina Tweedie, an Anglo-Russian Sufi-teacher (author of Daughter of Fire: A Diary of a Spiritual Training with a Sufi Master

). In the late 1980s, Annette Kaiser opened her Tai Ji DO-School, training teachers for over 30 years. Since 1998, she is authorized by Mrs. Tweedie to continue the Naqshbandiyya Mujaddidiyya Sufilineage, guiding human beings on the path of love. In the year 2000, she developed the „DO-path“, which she continues to develop and which enhances a deep transformation of the heart as a way of living in a non-dual, cosomocentric understanding. In 2017 she started teaching the art of spiritual dreamwork.

She is particularly devoted to transconfessional and transcultural evolutionary spirituality, which implies an open aware state of being as the natural expression of an integral way of living in a very deep sense. This way leads to Universal Spirituality and Universal Cooperation as Not-Two. In both areas, Annette Kaiser initiates and participates in many ways (retreats, workshops, conferences, audio-conferences, etc.) with different groups, centers and human beings in Europe and worldwide. She sees the 21st Century as a call for humanity to recognize itself as inseparably One, co-creating a new culture in collective wisdom and love of One Heart.

In addition, she engages herself also on a very practical level, always in the spirit of what Universal Spirituality means for her – ONE World – ONE Humanity – ONE Consciousness – locally and globally: e.g. recently by initiating the Co-creating Europe movement, or supporting the project of “Lebensraum Belmont” next door. And for over 30 years she is president of the not-for-profit association “Open Hands” that supports projects in Asia, Africa, and Latin America. Furthermore, projects like “The path of Love – A Meditation path” and the meditation “The Golden Thread – for ONE WORLD” have been inspired by her.

She is married, mother of two adult children and grandmother.