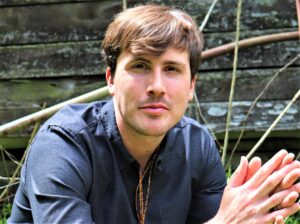 Andrew Hewson is a contemporary spiritual teacher whose focus is on the realization of the Presence of Divinity as one’s fundamental Source and Self. Emphasizing transcendence as a process that can not only be undergone in the midst of daily living but even facilitated by it, Andrew speaks from the experiential reality of having been carried by the Grace of total transformation in the context of daily life.

Growing up in the Southeastern United States, Andrew’s childhood was characterized by a state of lightness, freedom, and underlying connection.  This effortless Way of Being was taken as an unspoken given until an intense qualitative shift took place in his early teens. The condition which once prevailed progressively became replaced by an acute sense of separation, limitation, and lack, leaving little room for functional participation in the common activities of human life.  With this radical drop into apparent fragmentation, Andrew began to seek relief wherever possible. This seeking eventually led to the discovery of altered states of consciousness through the use of alcohol and drugs which quickly spiraled into the pits of despair.

After years of unsuccessfully attempting to live from such a constricted sense of identity, Andrew found himself in a medical isolation jail cell facing 30 years in prison. It was there, in the midst of absolute hopelessness and despair, that the Grace of Surrender shone forth, bringing about a profound shift in Consciousness. This transformation revealed a Still, Silent Presence, or Field, Divine in Its Nature, and ignited a fire for spiritual evolution.

With a natural and impersonal application, Andrew was given to prayer, meditation, and spontaneous investigation into the nature of identity. The process of Transcendence took place in the day-to-day ebb and flow of human life, culminating in the replacement of the sense of a personal, separate self with the Infinite Context of Divinity.  This Reality has since lived and loved while engaged in the common activities of the human experience, serving wherever possible while still finding space for silent reflection in Nature and tasting the Infinite expansion of further refinement.

The role of speaking and teaching is not something that was decided upon at a given point in time but is rather a spontaneous and uncontainable expression of the Love that prevails in the condition from which the words emerge. Andrew speaks effortlessly by the grace of Divinity and gives all Glory to the One that abides in the Hearts of All.

He also lectures on the evolution of conscious experiencing and the application of this understanding in areas of human suffering such as addiction, mental illness, and eating disorders.

Andrew currently resides in Western North Carolina with his wife and partner Elle Hewson where they are working together with devoted friends to be of greater service to those who have been called to Truth, Love, and the fulfillment of Our Highest potential.