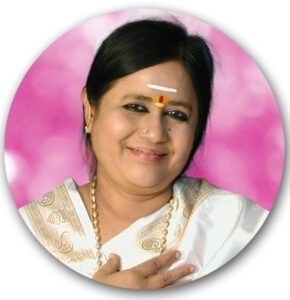 Sri Karunamayi is revered in India as an embodiment of Divine Motherly Love, due to the love and affection that she showers liberally on all people, animals, and even plants, the spiritual knowledge and guidance that she gives freely to all of humanity, and the humanitarian works that she has undertaken. “Amma” as she is affectionately called by her followers, is simply the Telugu word for “mother”- Telugu being Amma’s native language.

Born in 1958 in South India, Sri Karunamayi spent a childhood immersed in an atmosphere of prayer and worship created by her deeply spiritual parents. Both of her parents had received visions indicating that Sri Karunamayi was not an ordinary child, and her astrological chart indicated that she would dedicate her life to serving humanity.

Naturally inclined towards charity as a child, Sri Karunamayi, or “Amma,” would often give away food and clothes to whomever needed them.

As she grew into a young woman, Amma felt an inner urge to begin spending more and more time in the family worship room, immersed in prayer and meditation. As she was now a first-year college student, she was forced to make time for meditation by reducing the time she spent sleeping. As her meditations deepened and intensified, she also began reducing her intake of food. These meditation sessions grew in length until one day Amma locked herself inside a room of the house and remained there in meditation for a month.

Though her family members were perplexed, they did not dare to disturb her, having witnessed the profundity of her meditations before. When she finally emerged, she seemed like a different person to her family members. Though she still showed the same sweet affection to which they were accustomed, her demeanor now expressed a more impersonal, universal love. Determined to fulfill the sacred purpose of her life, Amma gently told her mother that it was time for her to go into seclusion in the sacred Penusila Forest, to meditate there in solitude. Always respectful of her daughter’s divine nature, and trusting completely in God, Amma’s mother did not try to stop her from going.

Amma never felt that these meditations were done for her own sake, as she was following the example of India’s ancient Vedic sages, who meditated for hundreds of years in order to discover the best teachings for all of mankind. Through Amma’s austerities, she determined which of the Vedic teachings and practices would be of greatest benefit to people living in this difficult modern age. After performing such intense tapasya for over 10 years, Amma decided that it was time to share her knowledge with all those who thirsted for true spirituality, wherever they may live in the world.

Emerging from her seclusion in the sacred Penusila Forest, Amma began giving public discourses on various aspects of Sanatana Dharma, India’s ancient spirituality, and conducting sacred ceremonies to promote world peace and universal well-being. At this time, Amma also began Her work on serving humanity in the eradication of  poverty, providing free medical care & housing for the disadvantaged, stopping child labour through free schooling and mentorship programs, and supplying water treatment facilities to those impoverished communities that have been severely affected from toxic water resources.  After performing such intense tapasya for over 10 years,  Amma moved to a more urban area to share her knowledge with all those who thirsted for  spirituality, wherever they may live in the world.

In 1995, Amma began reaching out to the world, beginning with the US, where She offers yearly public programs.  During these programs Amma gives teachings and blessings, holds meditation retreats, and performs sacred fire ceremonies for the benefit of all of humankind & the world. During her visits to each city, countless followers come to express their worries and problems and to request blessings or guidance.  And to this end, Amma uses Her own sari to wipe away the tears from Her children’s eyes as She comforts every follower with Divine Motherly Love. Amma often likes to say that Her only work in this world is to remove the suffering from the hearts of Her children. This she does through Her kind, loving words of spiritual guidance and encouragement, Her healing touch, and Her divine knowledge and insight. Today, Amma divides Her time between the US, Canada, Europe, Asia, Australia and India, fulfilling Her life’s mission of providing comfort, solace, and spiritual guidance to all who come to Her.