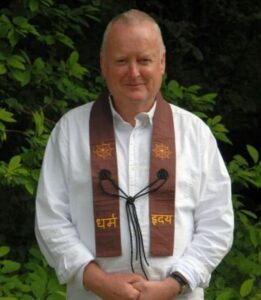 I was born in Oxford, England, in 1946, and I’ve been a practicing Buddhist for 40 years. I began training with Zen, practicing with the Venerable Myokyo-ni, a teacher from the Rinzai school, at the Buddhist Society in London. This was my practice for more than five years, before travelling to Sri Lanka in 1980. Here I lived for three years as a Theravada monk under the guidance of the Venerable Dhammaloka Maha Thera. It was while I was in Sri Lanka that my spiritual breakthrough took place in 1981, and it is this that forms the framework of my first book, A Record of Awakening, published in 1999.

There is an interview made for television by conscious.tv that covers this period of my training. There is also an edited transcription version on this website.

On my return from Sri Lanka I matured my practice by essentially living on my own for a number of years in east London. At the time of my breakthrough in Sri Lanka my teacher told me I should travel and begin to teach, but it was to be around 20 years before I took that role when I began leading retreats at centres of the Triratna Community in the UK and abroad. My association with this movement came to an end in 2006, and the DharmaMind Buddhist Group started independently the following year.

On July 31st 2015, Āloka peacefully passed away.  His funeral service was in the Birmingham Buddhist Centre on August 13th.  He wrote this farewell letter before he died and asked that it be read out at the funeral as his final words to his Sangha and Dharma friends.