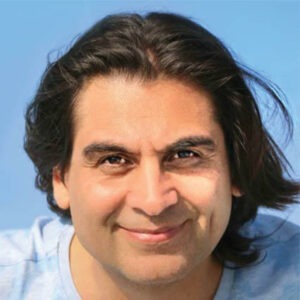 Abdy was born in Iran in 1964 to the Electriciteh family.

At an early age he realized that his realm of reality was beyond what he could share with others. As a child, his awareness of extraordinary abilities, such as putting light and sparkles on people, could only be rationalized as a dream. When, thirty years later, he realized those sparkles were being received by the people, healing them physically, emotionally and spiritually, he gave up his adapted reality to his child-hood reality. In 2002 he began working around the world anchoring light and spreading his wisdom.

Abdy works with an ancient energy which dissipates our inabilities to relate to our self, higher self and the universe.

His work is to bring about and support the transformation of humanity and the Earth to a higher consciousness. This is carried out by raising the vibration of people and places. He channels an energy that allows an individual to connect to their own divinity.

He believes the truth cannot be learned and can only be connected to, from within. Even though most of his work is energy-based, he guides people to realize their gift and their wisdom.

Through Abdy’s presence, some people have become healers, spiritual teachers, life coaches and many free from physical and emotional illnesses, but many more have been gifted to see the beauty of life and its participants.

Abdy’s gift is to radiate timeless, spaceless connection to the Source. The universe’s gift to Abdy is for him to live life knowingly connected.