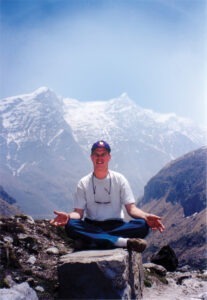 As a teenager, Steve Briggs met his guru at a meditation retreat in the Swiss Alps. After studying English Literature at the University of Arizona on a tennis scholarship, the author received an MBA and a Ph.D. in Vedic Studies and traveled internationally instructing thousands in the art of meditation.

Steve is a devotee of Mata Amritanandamayi (Amma), whom he met in India in 1996. He has been practicing Transcendental Meditation (TM) for the past 46 years and credits his guru, Maharishi Mahesh Yogi, with showing him the path to enlightenment.

In 1994, Steve Briggs was sent to India to teach TM to corporate executives. During his seven years in India, Steve traveled repeatedly to the high Himalaya where he encountered many yogis and sadhus.