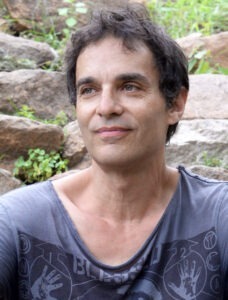 Salvadore Poe was a successful musician from New York, making records, touring, having videos on MTV, and doing film scores when in 1997 he had a life-changing experience that propelled him on a single-pointed inquiry in search of enlightenment. During the next seven years, he immersed himself in intensive retreats in USA, Europe, and India, met many teachers, including U.G. Krishnamurti, Douglas Harding, Toni Packer, among others, and eventually moved to India where he lived for two years in the ashram of Ajja, a recognized spiritual master, and then for a year in the ashram of another spiritual master, Siva Sakthi Ammaiyar. During all these years he meditated countless hours, had numerous mystical, transcendent experiences, and then finally, frustrated with it all, met his last teacher, Dolano in 2004, and his search was over. Eight years later, living an ordinary life making music in India, someone he met asked him to work one on one with a spiritual seeker.

Since then Salvadore has been offering a means of inquiry intended to let you come to know for yourself that you are now and always have been complete, whole, lacking nothing and free. This recognition, when true and doubtless, ends seeking automatically, as it is seen that what you have been seeking is already true and realized. What has kept you from this ‘knowing’ are all of the myriad ideas, beliefs, and spiritual concepts given to you by culture and religion, which you have taken for granted without really investigating. But once clearly investigated they all fall, leaving you at ease here and now with and as what is. Seeking is finished, there is no cause of it any longer. Life is lived at ease.

Salvadore currently divides his time between India and New York State, writing and recording music and sharing the inquiries.