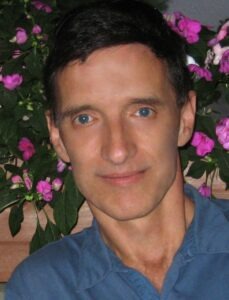 Prasannan had a fascination for Astronomy from an early age, having built his own telescope, and spent his teenage years studying the stars and planets. He was the president of the Astronomy, and Photography Clubs in high school. He always understood that what we see is only a tiny portion of the totality.

At Easter, in 1987, he attended a retreat which resulted in a spiritual awakening, leading him to conclude that he had always been on a spiritual path. As a result, he adopted a celibate (brahmacharya) lifestyle.

Having studied the teachings of Ramakrishna Paramahamsa, Ramana Maharshi, and Swami Sivananda, he heard about Mata Amritanandamayi (Amma), and met her during her 1990 North American tour. At the time, he held a senior management position in corporate finance.

He had a natural motivation towards engaging in serving selflessly (Seva). The Sanskrit word “Seva” means helping others out of compassion, without a conscious thought of receiving personal benefit.

Prasannan moved to Amritapuri, India in 1992; on arriving he was placed in charge of the computer room, and developed a new accounting system, training the brahmacharins (monks) in its use; at the same time a Jyotish software program was acquired, which Prasannan became responsible for. At the direction of Amma, he began his practice of Jyotish, which continues to this day.

He travelled around the world with Amma, providing Jyotish interpretations during her programs. At other times he conducted sessions in India, raising funds for Amma charities.

After 19 years in India, he returned to Canada and established his independent Jyotish practice. After more than 2 decades of brahmacharya, he married Maya, the love of his life!

Prasannan has consulted with more than 60,000 clients throughout the world. He answers questions about all areas of life, material, familial, health, and well-being, as well as spiritual.