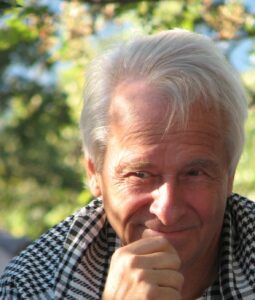 Nukunu was born in Odense, Denmark 1947.

He left school 13 years old. He was declared hopeless so he was given no education certificate.

He worked and trained as a house painter for the next 4 years.

After 9 months of military service he started to study again, first secondary school, then college and the University. He holds a Bachelor in Philosophy and a Master in Psychology.

In the end of his Master degree in 1979 he met Osho. Maybe the most important event in his life so far.

He worked as a therapist in Poona and the West for the next 16 years. When Osho died in 1990, Nukunu was carried on to another Enlightened Master Poonja’ji in Lucknow. He spent 4 years with the great Master until he finally met the masters of the Sacha Lineage in 1994. On March 9, 1995 there happened spontaneously a shift in Nukunu’s consciousness and a radical new way of viewing life was born.

Since then all his work has been centered on helping people into the non-dual.

Nukunu uses his background in meditation and therapy to invite you into who you are.

“Relax as awareness into this moment and it will reveal itself.”

His Dharmadoors are all about going beyond the separation of “I” and the content of consciousness.

He is offering Satsangs, Intensives, retreats, and training in Non-Dual Therapy.