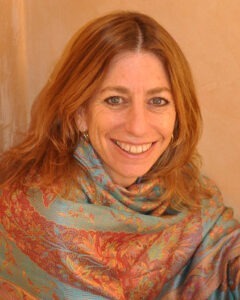 Daugh­ter of the counter-culture, Mirabai was born in New York in 1961 to sec­u­lar Jew­ish par­ents who rejected the patri­archy of insti­tu­tion­al­ized reli­gion. Intel­lec­tual artists and social jus­tice activists, they were active in the anti-war protest move­ment of the Viet­nam era.

In 1972, Mirabai’s mother, father, and her younger brother and sis­ter uprooted from their sub­ur­ban life and embarked on an extended road trip that led them through the jun­gles of Mexico’s Yucatan Penin­sula, where they lived for many months on an iso­lated Caribbean beach, and ended in the moun­tains of Taos, New Mex­ico. There, the fam­ily embraced an alter­na­tive, “back-to-the-land” lifestyle, in a com­mu­nal effort to live sim­ply and sus­tain­ably, val­ues that remain impor­tant to Mirabai to this day.

As a teenager, Mirabai lived at the Lama Foun­da­tion, an inten­tional spir­i­tual com­mu­nity that has hon­ored all the world’s faith tra­di­tions since its incep­tion in 1967. This ecu­meni­cal expe­ri­ence.

Mirabai has been an adjunct pro­fes­sor of Phi­los­o­phy and World Reli­gions at the Uni­ver­sity of New Mexico-Taos since 1993. Her empha­sis is on mak­ing con­nec­tions between the peren­nial teach­ings found at the heart of all the world’s spir­i­tual paths, in an effort to pro­mote peace and justice.

She lives in the moun­tains of North­ern New Mex­ico with her hus­band, Jeff Lit­tle (Ganga Das). Between them, Mirabai and Jeff have four grown daugh­ters and six grand­chil­dren. Mirabai’s youngest daugh­ter, Jenny, was killed in a car acci­dent in 2001 at the age of four­teen. On that same day, Mirabai’s first book, a trans­la­tion of Dark Night of the Soul, was released. She con­sid­ers this expe­ri­ence, and the con­nec­tion between pro­found loss and long­ing for God, the ground of her own spir­i­tual life.

Interview recorded 10/25/014 at the Science and Nonduality Conference.