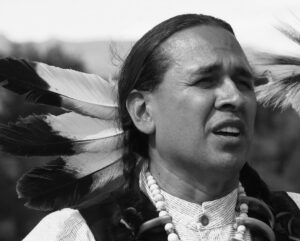 Hoksila Lakota, commonly known as Lakota John is a Native American whose heritage comes from Oklahoma and the Great Plains of North America. Many generations ago his people lived in harmony with all things Universal, “uni” meaning One and “verse” being Song. When a system came in that crippled the people, making them dependent, some stayed and accepted the system, and some left seeking broader horizons.

Rejecting the life of poverty and struggle he was born into, as a young man Lakota John fully embraced the illusion of glamour, bright lights, and the fast pace of a big city. Trading in his cultural identity and the ways of his ancestors – a way of prayer and Spirit – he was lured by the seductive power of the city’s underworld, chasing the counterfeit lifestyle of money and self-gain.

After traveling down many dead-end roads in a reckless disregard for life, the light finally dawned, and Lakota awakened to the prompting of Spirit and ancient ancestors calling him back to the Red Road of Sobriety. Finding his innocence, or inner sense, by working through his past, he began to walk the straight and narrow path that leads to the sacred Tree of Life and reunion with the Highest Good, God or Wakan Tanka.

The impact his own restoration had on his life moved him to reach out to others, and ever since he has been involved in the mental health sector and working with keepers of the sacred pathways and knowledge for over twenty years. Through the lifestyle he once lived he is able to recognize the unseen enemy that binds and captivates the soul of man and woman through separation, suppression, and sedation. Using the time-tested spiritual wisdom of his ancestors he helps guide others back from the dark world that he himself used to live in; the world of illusion, delusion, and separation.