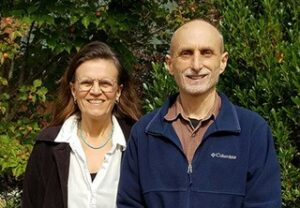 Kittisaro and Thanissara have been married since 1992. They spent 7 years as guiding teachers of the Buddhist Retreat Centre KwaZulu S. Africa and then went on to found Dharmagiri Sacred Mountain Retreat on the border of Lesotho and South Africa. They co-founded several HIV/Aids Outreach Programs and currently support Kuluingile Project, a home for children left vulnerable due to HIV/Aids run by Sister Abegail Ntleko, award winner of the Dalai Lama Unsung Hero Award. They lead retreats in S.Africa, UK, U.S.A and Israel and regularly host one to three-month retreats at Dharmagiri. They currently reside in Sebastopol, CA.

Kittisaro is from Tennessee, USA. He graduated from Princeton as a Rhodes Scholar. He ordained with Ajahn Chah in 1976 in the Thai Forest Tradition. He was a monk for 15 years and helped found several monasteries in the UK. His practice has also been informed by the Chinese school of Master Hua since 1980. Kittisaro completed two one year silent self retreats and is co-author of ‘Listening to the Heart.’ He has taught extensively since the 1980’s and is a core teacher at Insight Meditation Society, MA, founding teacher of Chattanooga Insight, TN and affiliated teacher at Spirit Rock Meditation Center, CA.

Thanissara is from an Anglo-Irish family in London. She started Buddhist practice in the Burmese school in 1975. She spent 12 years as a Buddhist nun in the Forest Tradition of Ajahn Chah where she was a founding member of Chithurst Monastery and Amaravati Buddhist Monastery in the UK. Thanissara has an MA in Mindfulness-Based Psychotherapy Practice from the UK. She has taught extensively since the late 1980’s, is the author of several books, including two poetry books. Her latest is Time to Stand Up: An Engaged Buddhist Manifesto for Our Earth.

Discussion of this video in the Batgap Community Facebook Group.