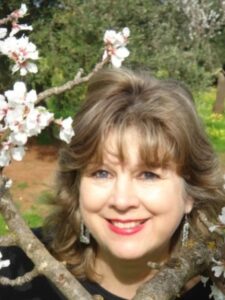 In the eighties, Julie Chimes-Laws worked in the media-based London’s Fleet Street. Company director, businesswoman and part-time racing driver her world underwent a dramatic change when an out-of-the-blue attempt on her life left her for dead. Viciously stabbed repeatedly within millimeters of her life her subsequent survival was considered to be something of a miracle. She wrote a profound yet humorous autobiographical account of her experiences, both in and out of body, A Stranger in Paradise, which was first published by Bloomsbury, London. The book was distributed on three continents and translated into five further languages creating a wave of positive media attention around the world. The extraordinary story was also the subject of a critically acclaimed BBC documentary, which she scripted and co-directed.

Leaving the world of convention behind Julie has spent the last seventeen years living abroad. She has traveled extensively during this time whilst encountering the weird and wonderful. Stepdaughter of the great comedian Max Wall, daughter of one of the world’s most beautiful women, and sister to a wonderful soul with autism, her unconventional upbringing gave her a love of finding mirth in the midst of the mundane, and a passion for storytelling. A gifted speaker, she has addressed and entertained diverse audiences around the world sharing the experiences of her many adventures and fresh insights on life and death.

After facing her own mortality she vowed to ‘try on’ as many lives as possible. Olive farmer, cleaner, facilitator of international retreats and workshops on meditation, garden designer, chief cook, host and bottle washer for an restaurant located in her own Andalusian patio, property and pet sitter, painter, decorator, and life counselor to name a few, whilst receiving an unorthodox training as a singer in the basement of a brothel and performing as a soloist in some equally unlikely venues.

Having gathered a wealth of original material over the last seventeen years, Julie is now dedicated to full-time writing. Passionate about projects that have the power to uplift, amuse and inspire humanity, she is currently working on a book about forgiveness, with a feature film script, children’s stories, a drama and a comedy series for television and a second book about her adventures planned for the future. She shares her time between Spain and France, where she lives with her editor husband Richard in hidden places away from the marauding British investors.