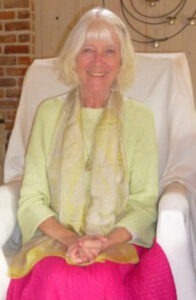 Jacqueline Maria Longstaff began having peak experiences at an early age. She held her first spiritual service – for kids – at age 7. She had a huge heart opening at age 19, but not knowing where to go with this, became a Catholic for a few years and taught in Africa. However, soon she was drawn towards the teachings of the East. The need for religion of any kind dropped after an awakening at the Osho ashram in 1979. 1980 saw the beginning of some powerful connections with inter-dimensional beings as preparation for her future work.

She was officially an Osho sannyasin for almost 4 years, but her real guru was Swami Devadas, one of Osho’s earliest disciples.

She began guiding others in 1979 and has held courses, retreats, and satsangs in many countries. She has been a speaker at conferences in several countries throughout the last 25 years.

In 2003 she began creating an Ashram near the sacred hill Arunachala in South India.

For 7 years she produced and hosted 2-hour radio programs for Radio Lotus in Copenhagen.

Her education includes a teaching degree, astrological and esoteric studies, astro- psychology and spiritual psychology studies, and much more.